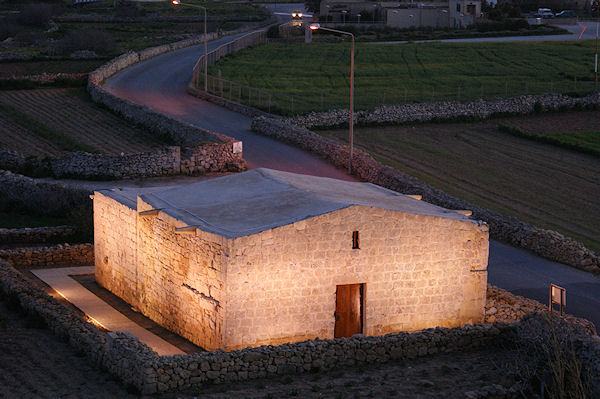 The St. Cecilia Church chapel is the only one on the island dating back to medieval times. It was dedicated to Santa Cecilia, patroness of sacred music, whose feast was celebrated on November 22 and is believed to have served, amongst others, the family of Manduca Piscopo who was commandant on the island and living at the near-by tower - The Santa Cecilia Tower.

The date of construction of the church, which lies in the shadow of the Santa Cecilia tower, cannot be determined.  It is said that it was built about 1540 and the oldest reference concerning this chapel is recorded in the Pastoral Visit of 1615. It was completely restored by 1630 and in1635 the devotee Pasquale Muscat was recorded to have given the sum of six tari per year for the maintenance of the church.  However this payment seems to have ended with his death, which is registered to have occurred before the final desecration in 1644.  A few years later Xewkija became the first rural parish of Gozo and the building of the parish church of St. John the Baptist meant that the centre of religious activity was established east of the locality of Ta’ Santa Cilja.

This small church is the best surviving example of the many unaisled chapels that once dotted the countryside.  Like other late medieval chapels it is a plain cube except for its slight pitch of the roof.  It measures seven by seven metre, nearly a perfect square.  It is divided into four bays by three slightly pointed arches rising from wall piers to carry the shallow pitched stone roof.  The chapel is built of stone with the front elevation formed in regularized blocks while the other walls are in random rubble stonework.  Three steps lead down to the chapel floor which is about a metre below ground level.  The only light source to the interior is a single rectangular window over the door. 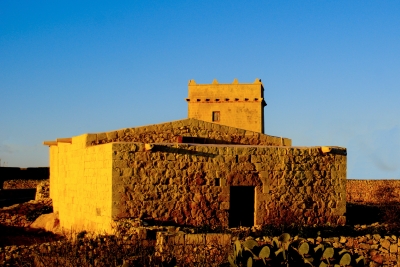 Santa Cecila Chapel & TowerThe abandoned church became an ancillary building to the Santa Cilja tower and it is possible that at some point it was used to house a mule-driven mill. The tower and church were scheduled as Grade One monuments back in 1996 however the church remained abandoned and deteriorated due to the elements as well as vandal attacks, such as the August 2007 fire.  By 2008 these two factors had reduced the chapel to an unstable structure due to a collapsed wall (west wall) as well as the collapse of several roof slabs.

he chapel was entrusted to Wirt Għawdex, under a management agreement with Ministry for Gozo, for restoration in 2008.  Thanks to assistance from the Ministry for Gozo, the full sponsorship by the Baron Group of Companies - Gozo, additional funding through eco-gozo projects and the fund-raising efforts of The Rotary Club Gozo, the structure of this small church has been fully restored and was official opened in late March 2012.  The Mgarr ix-Xini coastal tower was completely restored by Wirt Għawdex in 2009.   The chapel is open to the public on certain days, and is manned by volunteers.

The society, with the support of all the involved sponsors, managed to breathe new life into this Gozitan unique heritage site.  It has, since its opening, been utilized for various lectures, conferences, group visits from Malta, Gozo and overseas and special viewings to visiting dignitaries etc.  Wirt Għawdex is proud of having saved this only remaining medieval chapel for today’s and future generations.