Introduction to the Gran Castello (Citadel)

The Gran Castello has played a leading role in the island’s history from at least 2000BC. The earliest archaeological evidence of consistent human activity on site goes back to the late Bronze Age. Following the arrival of the Phoenicians (c. 1000BC), the Gran Castello seems to have been used mostly as a stronghold. It remained in use throughout subsequent domains including Punic, Roman, Byzantine and Norman. In July 1551, shortly after the arrival of the Order of St. John, a Turkish armada forced the garrison into surrender and the whole population of Gozo was taken into slavery. This catastrophic event forced the Order to modernize and strengthen this fortress for the protection of the island from further attacks.

Gunpowder fortifications were designed to withstand enemy shots and enable the deployment of an array of offensive firearms. For instance, at the turn of the eighteenth century, the Gran Castello was armed by a complement of between thirty to forty artillery pieces and its armoury contained several mortars and close to four hundred and muskets. Needless to state the usefulness of these weapons relied heavily on the timely provision of good quality and adequate stocks of gunpowder. Appropriate storage facilities were therefore a must. While ensuring practical accessibility to the battery itself, such facility had to be sited as far away as possible from the enemy’s line of fire. 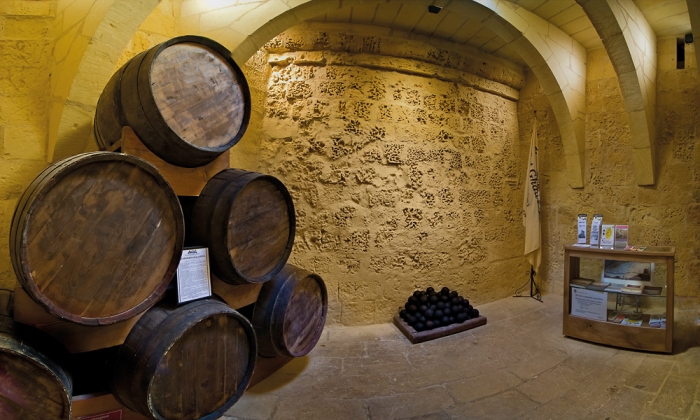 Polvrista (Photo by Daniel Cilia)By the turn of the eighteenth century, the gunpowder magazine at the foot of St. John’s Cavalier is referred to as ‘old’, but on close inspection it emerges as a subsequent addition to the abutting early seventeenth century ramparts. The whereabouts of the former gunpowder magazine and the date of construction of the present facility remain unclear. It was definitely in place by 1690 when parts of the overlying ramparts collapsed onto and caved in part of its structure during a heavy storm. As to accessibility, present day Triq Bieb l-Imdina used to flow all the way to the doorstep of the gunpowder compound. More importantly, the site stood hidden from enemy view and beyond reach from the most likely neighbourhoods that could have been employed by the besiegers to pound the Gran Castello, namely Rabat’s historic core and its immediate environs or Ta’ Gelmus hill.

The gunpowder magazine has a typical two-skinned wall construction and is perforated by a centrally placed door and two blind ventilation-slits. The roof (restored) follows the traditional technique of flat slabs carried over transverse arches, while the centrally-placed skylight is a subsequent modification. Worth noting are the many graffiti on the respective stone blocks. Some are set high on the wall, thereby suggesting the recycle of building blocks from earlier constructions as customary at the time.

The Polverista, also known as the Gun Powder Magazine was completely restored by Wirt Ghawdex in 2008. The site which includes 3 other major attractions (see below) is open to the public on certain days, and is manned by volunteers.

Defence strategies entail the apt provision of food and potable water supplies. Determined besiegers could resolve to overtake their prey by starving it to death. In fact, whenever faced by fresh threats of potential enemy assaults, the Early Modern establishment in Gozo replenished all known public and private water cisterns within the Gran Castello and stocked supplementary food rations. 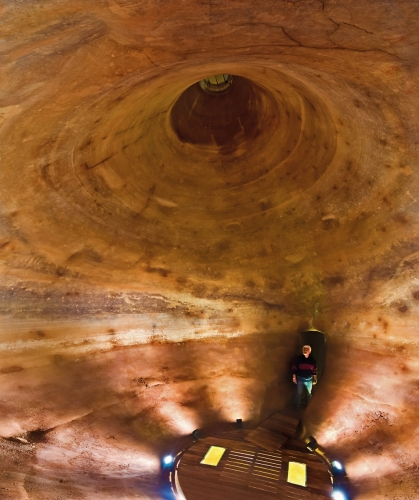 Bread constituted the staple diet and as part of the early seventeenth century refortification programme three large silos for the storage of grain were erected on the site of the late medieval Hebrew Ghetto next to St. John’s Cavalier. These have the shape of a flask and have a combined capacity of circa 100 cubic metres. The largest of the three is almost 11 metres deep and measures around 3.6 meters at the widest part.

With the arrival of the British, in particular after the liberalisation of the grain importation market, these silos seem to have fallen into disuse. Concurrently, the Colonial Government embarked upon a comprehensive project spread over several decades to enhance the quality of life of the ever growing population by providing a better sanitary infrastructure, including clean water. A major upgrade was taken in hand in February 1877.  A pipeline from the Għajn Luqin spring at Xagħra was channelled across Marsalforn valley into the former early seventeenth century grain silos within the Gran Castello, thereby supplementing Rabat with a further 3000 gallons of fresh water in winter and 600 gallons in summer. The spacious rock-hewn room leading into these silos and the interlinking passage at their base date from this phase.  Also, an impermeable lime based layer was applied throughout to seal effectively the porous rock.

By the 1930s, the Gran Castello’s system of service tanks was feeding Rabat, Kerċem, Għarb, San Lawrenz and Għasri. The water reservoirs inside the ditch were phased out of service during the late 20th century, whereas the former grain silos remained in service up till March 2004.

Lying well over twenty kilometres away from the Grand Harbour and the airfields at Hal Far, Hal Luqa, and Ta’ Qali respectively, and devoid of any Allies’ 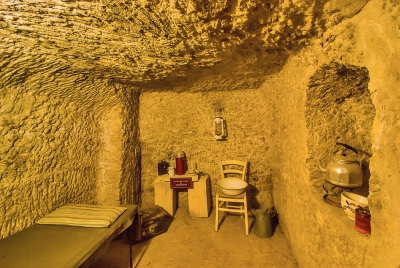 WWII-Shelter (Photo by Daniel Cilia)installation of relevance, the island of Gozo escaped the Axis’ brutal massacre that decimated Valletta, Cottonera, and the other neighbouring towns. It was nonetheless subjected to several airborne harassments during 1942 that claimed the lives of many civilians. Faced by such hostilities, the people of Gozo and the 6000+ refugees from Malta had no other option but to seek shelter underground. Air-raid shelter construction in Gozo was given due attention as from beginning 1941 and dragged on till end 1942.

Out of some 170 public shelters constructed by the Works Department in Gozo, twenty were to be found at Rabat, then as now, the most populous settlement on the sister island. Their siting presented a major challenge as the greater part of the town’s historic core stands on a clayey outcrop. Two largish shelters were resultantly dug at the foot of the towering walls of St. Martin’s and St. John’s Demi-bastions respectively.

The passageway leading to the Battery received five claustrophobic rooms to accommodate as many families. Most owners spent the night therein as a precautionary measure against surprise attacks. These tiny shelters were however never approved by the authorities since their occupants would have been in mortal danger of drowning should the water reservoirs right behind them been hit by enemy fire.

The Battery of artillery platform at the back of St. John’s Demi-bastion finishes off the northeast extent of the early seventeenth century defensive enclosure. It rests on the tricky Blue Clay slope and consists of solidly packed work that stretches the entire breadth of the adjoining ditch. This battery was meant to offer enfilading cover to the medieval enceinte and the early seventeenth century ditch, rather than long range offensive on the same lines of the bastions and the cavaliers.

Before the widespread development of gunpowder technology from the fifteenth century 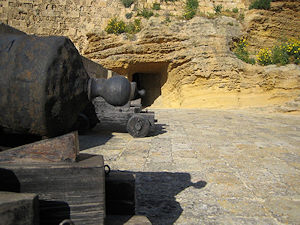 onwards, fortification design relied heavily on sheer height: the loftier the more unassailable. In principle little has changed from prehistoric times. The northern section of the Gran Castello’s medieval enclosure, the greater part of which is still standing, consists of perpendicular wall placed precariously close to the edge of the cliff face, thereby adding up a vertiginously tall and practically unassailable ensemble. With gunpowder, the same invulnerability altered into a critical weakness. High walls equate easier targets, while the absence of buttressing  at their back reduced drastically their capability to withstand enemy bombardment. Worst still, due to the prevailing convex alignment, the enemy could resort to burrow unhindered into the soft Green Sand sediment at the foot of the cliff face and blow up the bedrock cap and overlaying constructions. To this effect, the guns deployed at the Battery discouraged the enemy from such undertaking.

Today, the battery offers an ideal viewing platform to appreciate the these fortification , northern Gozo, Rabat’s historic core, and beyond.