The Mgarr ix-Xini coastal tower was completely restored by Wirt Għawdex in 2009. The tower is open to the public on certain days, and is manned by volunteers. 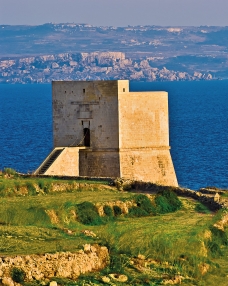 Mgarr ix-Xini Bay, on the South side of the island, was used by Turkish raiders in raids on Gozo, especially the famous raid of 1551, when according to historians, the whole population was carried off into slavery. At the end of the sixteen century a Tower was built to safeguard this inlet.

The tower is now known as 'It-torri ta’ Mgarr ix-Xini'. It was built at the expense of the local Universitas on a plan by Mederico Blondel, an engineer of the Order of Saint John. Its estimated cost was 857 Scudi. The tower was functioning by June 1661, when its artillery and gunpowder were provided by the Order. It was manned by a castellan and a professional bombardier, both of whom were salaried by the Universitas. This tower could send and receive communication from the Comino Tower and later,  also from that the Santa Cecilja Tower.

The tower, with the entrance landward, has two floors with one room each. The lower room has a ceiling of arched stone corbels, two small windows and a hatch leading to the upper or main room. This was the living and all-purpose room of the guards. The room has a strongly built vaulted ceiling to withstand enemy cannon ball. A winding spiral staircase leads to the roof. On the roof there was a gun platform enclosed by its embrasured parapet. On the landward side, there was also a small powder magazine and a guardroom, the latter a unique feature in that location. These are now half dismantled. However this tower was not adequate and a bigger tower was built inland on the hill overlooking the bay, on what is today’s Gozo main road, known as the Santa Cecilja Tower.

Restoration works started in the year 2000 in a concerted effort between the Ministry for Gozo and Wirt Għawdex. Works included the dismantling and re-construction of the façade and corner facing the sea, both of which were in a very bad state of conservation and which were in imminent danger of collapse. Other works included the replacement of deteriorated stones and pointing and reconstruction of parts of the tower which were demolished over the years.

It was opened to the public in July 2009 following the completion of these extensive restoration works. The Mgarr ix-Xini Tower is today being managed by Wirt Għawdex through an agreement with the Ministry for Gozo.