“To Foster the Knowledge of and Safeguard the Natural, Archaeological, Historical and Anthropological Patrimony of the Islands of Gozo and Comino.”

Since the early seventies, there has been a continuous attempt to safeguard the historical sites of Gozo and Comino.

Members of 'Il-Belt il-Qadima' 1973Mr. Anton Spiteri and a group of other young, eager Gozitans wanted to highlight the poor state of repair the Citadel was in and they strongly felt that they should strive to protect this part of our island’s heritage. At first the work was limited to the Citadel and the name of the society was “Il-Belt il-Qadima” (the Old Citadel). Their first project was the restoration of the old St. Joseph’s chapel which was opened again in time for St. Joseph’s feast in 1974. This work was done under the leadership of Fr. T. Mercieca and a plaque is in place today to commemorate this event. Other work included the cleaning of the old clock at the citadel, removing weeds from the fortification walls and cleaning of the cannons and the old prison. 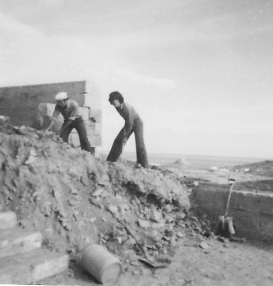 Later, the society felt that their scope should extend to cover the whole of Gozo and Comino and, at the committee meeting of July 6, 1981, the decision was made to broaden their work and to change the society’s name to reflect this. The name “Wirt Għawdex” was chosen and the society has kept this name to this day.

At the time there was far less awareness of the environment and cultural heritage than there is and one way of increasing this awareness was by means of a newsletter under the name of “Wirt Missierijietna” which later changed to its present name “GWL” (The word for Għawdex in Punic inscription). A statute was also drafted and it was determined that the general aims of the society were to be the fostering of the knowledge of our heritage amongst all levels of society and to strive to safeguard in the best possible way the natural, archaeological, historical and anthropological patrimony of the islands of Gozo and Comino. These aims have not changed and are today considered as the society’s Mission Statement.

One of the first tasks the newly named society took on was to compile a list and generate a report to identify historical sites that needed immediate attention from the authorities to safeguard them. The list included the Mgarr ix-Xini Tower, Comino Tower, the Dwejra Tower, the Cardona Tower, the Saint Cecilia Chapel, various fountains around Gozo, Dar il-Lunzjata and others. Today, many of these sites have been restored and are enjoyed by large numbers of locals and visitors alike.

The society also contributed towards the setting up of the Folklore Museum at the Citadel by donating a set of traditional fishing equipment which had belonged to the father of one of the founders of the organization, Anton Spiteri.

Over the years, the society has been instrumental in helping create the necessary

Dar il-Lunzjata our Headquarters (1981-2012)awareness for the safeguarding of vital aspects of our heritage. This is done in various ways such as becoming stake-holders with different authorities including MEPA; going into Management Agreements with the Government allowing us to restore sites and open them to the public; holding free public lectures; visiting schools and giving presentations to students; issuing Press Releases about important environmental issues etc.

The society presently has historical sites under management agreements with the Government, i.e. the Gunpowder Magazine site which also includes the lower battery, WWII shelters and the Silos; the Mgarr ix-Xini Tower and the Santa Cecilia chapel. These sites have been restored and are opened for the public by volunteers. Thousands of visitors, locals and tourists, are welcomed at these sites every year and are an important source of increasing awareness about our heritage. Our society, along with the sponsorship of Gozo Channel Co. Ltd, has also restored the only surviving Dghajsa tal-Latini which is now on permanent display at the recently refurbished Zewwieqa.

Wirt Għawdex also feels it has a duty to show corporate citizenship and in this regard, has chosen to support students doing their Sixth Form Systems of Knowledge projects. Each year the society takes on a group of these students and provides them with an opportunity to do their volunteer experience with it. The students are provided with training as necessary and are exposed to the many varied tasks undertaken by the society. Many times this is the first exposure these students have of the society and of the work required to safeguard our islands’ heritage and several students remain active with us even when their project is completed.

Initiatives for the protection of Gozo’s heritage include active participation in discussions and policy decisions taken by the authorities in respect of restoration, rehabilitation, management and increasing public awareness of sites of historic and ecological value – the island’s patrimony. Public lectures, seminars, cultural tours in Gozo, Malta, Comino and even Sicily, special educational programmes for school children, as well as many popular fund-raising activities in aid of its projects, have been organised by the society. Occasionally, a limited number of publications related to Gozo, including prints, are also produced. The vast array of subjects discussed cover various aspects of the natural and cultural heritage of the isle of Calypso. Wirt Ghawdex is  a full member with the Commissioner for Voluntary  Organizations  ( VO/ 0227) and the Gozo NGO’s Association.

Besides the three sites that are now fully restored and open to the public, Wirt Ghawdex has also embarked on major restoration and rehabilitation projects.  These include the recent restoration of the monument of is-Salvatur on Merzuq Hill (Marsalforn), the niche and statue of the Madonna tar-Rummiena and the statue of St. George in Enrico Mizzi Street, Rabat.  Other ongoing restoration projects include the '1881 Fountain' across from the Police station in Rabat, two statues outside the Capucchin Church on the way to Marsalforn and the re-construction of the tal-Ghonq Plinth.  Other work includes the tracing and recording of the many VR stones that used to dot the island and more than a dozen have so far been found and restored in their original spot.

While most of these projects are undertaken with the collaboration of the Ministry for Gozo, other sponsors include the Gozo Channel for the Dghajsa tal-Latini and The Baron Group for the St. Cecilia Chapel.