The restoration of the statue of St. Francis was completed in 2014.  The statue, by local 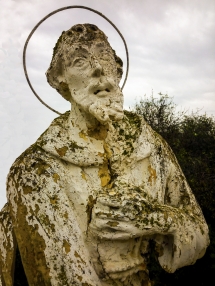 Beforeartist G. Agius, is made of globigerina stone and was found to be in very poor condition as it was badly deteriorated and had various breaks.

The head had been broken at some stage and had been re-attached to the rest of the statue with cement.  The torso, neck to waist, had also been broken and put together using unknown compound.  There were metal pins holding it together from the right shoulder to the left side of the waist.The statue had been painted white but this paint covering was almost totally chipped or peeling away.The removal of this paint was 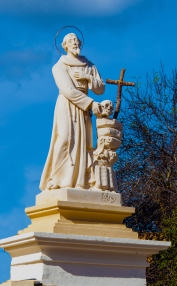 Afterundertaken utilizing surgical medicated blades, and hidden sculptural details were being uncovered.  The metal rods were causing corrosion and so they were removed and replaced with fibreglass rods.  Once the paint was all cleaned off, a process was carried out to absorb existing salt and to deter further salt damage.

The statue was re-painted in a natural stone coloured paint as per our consultations with restoration experts.