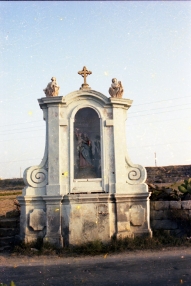 BeforeXewkija (at the crossroad of Xaghra/Nadur/Xewkija) was recently carried out  through a joint project between the Ministry for Gozo and Wirt Għawdex.  This old niche is made of globicerina limestone with a statue  of the Madonna and Child who is holding a pomegranate, thus giving the niche its name.   The niche also has representations of burning souls on each top side and a Celtic type cross in the middle, also made of limestone.  In the 1970’s the niche was moved  a few meters to its current location in order to accomodate the widening of the street. The niche has a wood and glass panel on the front.

Over the years, the niche had been covered with various layers of repair materials such as cement which were then painted over.   The bottom portion of the front wood panel seems to have caught fire at some time, possibly caused by a lit candle inside.  The original Celtic cross had been replaced with a more recent and smaller cross.  Due to the heavy-trafficked location, the stone-work was visibly deteriorated and was in need of a major clean-up and  restoration.

Initial consultations and scientific studies on the paintwork and the state of the statue and niche were carried out by Heritage ResCo.  The statue was then taken down and moved to Wirt Għawdex HQ for restoration.  It was interesting to find that both figures have glass eyes and both had many layers of  different coloured paint.  As these layers started to be taken off, facial features became more apparent and modifications to the Madonna’s head were also uncovered. Once the original colours were exposed, the repainting of the statue was carried out.

The niche at night

Old pictures showed an original  larger and different style cross.  While cleaning the surroundings of the niche, most of the pieces of the original Celtic cross were found and could then be put together and restored.  This original cross is much more in proportion to the size of the niche and has been re-installed on top of the niche.

The wooden parts of the niche were also restored including the replacement of the burnt portion. The stone of the niche itself was cleaned and restored where necessary and left in natural stone.

Waterproofing was inserted between the field soil and the niche to mitigate the water seepage from the surrounding fields.  This will help minimize the dampness inside the niche itself.  The niche has also been lit up. 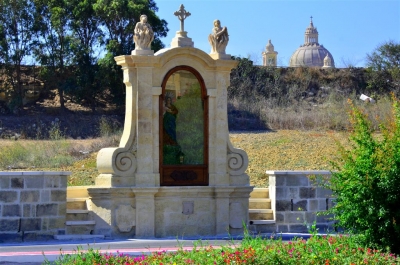