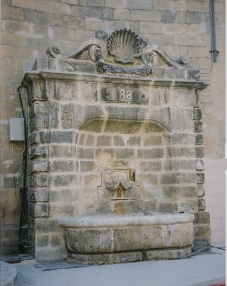 BeforeEmanuele Luigi Galizia (1830-1906).  The original and beautifully detailed drawings were endorsed and signed by Galizia in his capacity as the Superintendent of Public Works.

It is believed that it was built to commemorate the supply of water via aqueducts to the Capuchins’ Convent on same lines as water was supplied from Wignacourt’s Aqueduct to their Convent at Floriana.  However, its primary use was the supply of refreshing water to beasts of burden which were the usual means of transportation of the day.

The fountain was originally oriented facing South but was moved to its present position – facing North-West – when the roads were widened in the mid 1960’s.

Restoration works focused mainly on cleaning off the dirt and grime accumulated over the years and to replace the water spout carving (greenface) with one that was more faithful to the original plans.

This cross is one of several others found all over the island.  These crosses originally indicated the outside perimeter of holy ground, i.e. burial grounds, the limits of a parish or were just sited in front of a church.  According to Gozitan historian J.P.F. Agius de Soldanis this particular cross was the one belonging to the Gozo Matrice, now the Gozo Cathedral. It was moved closer to the fountain during the road widening of the mid 1970’s.

Restoration work on the cross included the cleaning of the stone, fixing the broken top cross and the removal of the floor flagstones which revealed another step that had been buried below floor level. 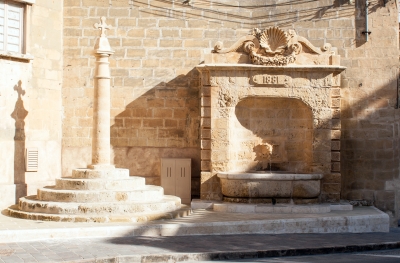 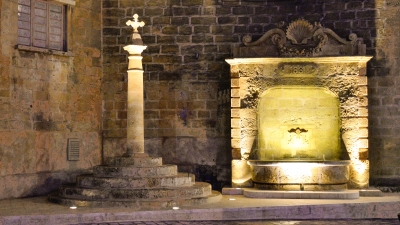